When Council Bluffs was still a gateway to the "Wild West" in 1884, a group of women banded together to live their faith and help people less fortunate than themselves. This

"Faith Band" gave food baskets to the poor, tended to the sick and taught sewing and cooking skills to young girls.

After a young woman was forced to deliver her baby in the city jail (the only shelter available), members of the Faith Band knew they faced a more challenging mission: to open a hospital where anyone in need of medical care would be welcome.

In 1886, the Faith Band incorporated into the Women's Christian Association (WCA). That same year, they opened Council Bluffs' first hospital in a five-room cottage at 312 Williams Street.

Preparing for the 20th Century

By 1887, the hospital had outgrown its cottage, so the WCA leased the house owned by P.J. McMahon, M.D., on the northwest corner of Sixth Avenue and Ninth Street. This was only the first of many expansions designed to meet the growing health care needs of southwest Iowa. Funds for the hospital's daily expenses and patient meals came from cash and food donations. As medicine progressed, so too did the services offered by hospitals. Hospitals could no longer be run by one untrained woman who was nurse, cook and maid to a handful of patients. Nursing would become a respected career after the hospital's School of Nursing opened in 1889.

First Nursing School in the West

Young, single girls enrolled in the apprenticeship program at the first nursing school west of the Mississippi River. Admission requirements included good moral character and the ability to read and write.

The program included hands-on training from older women who didn't have much more experience than their students did. Physicians took turns giving lectures and students were allowed to observe operations in the surgical theatre.

The central figure in the continued growth and development of the hospital was James D. Edmundson, an attorney, teacher and real estate broker. He married Jennie Way Hart, the only daughter of a local surgeon, in 1871. They were a popular, happy couple with many friends and interests. Jennie suffered a spinal injury in 1878 that confined her to bed until her death in 1890.

In 1889, the WCA asked J.D. Edmundson for a loan of $50,000 for further expansion. He agreed and said a loan would become a gift if the hospital was named in honor of his beloved wife. The WCA purchased the land at the hospital's present location in 1905, and construction began in September of that year.

Jennie Edmundson Memorial Hospital (JEH) opened its doors on February 12, 1907. Patients were moved by carriage to the new facility.

J.D. Edmundson's support continued with a generous gift of $225,000 upon his death in 1933. To honor a request from Mr. Edmundson, a bouquet of roses is placed beneath Jennie's portrait each year on her birthday. 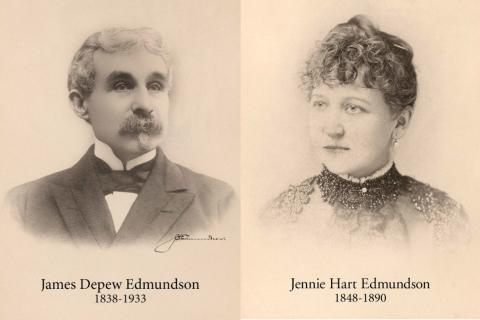 Preparing for the Future

In the ever-changing field of health care, adaptability is a cornerstone to success. In May 1994, Jennie Edmundson Hospital became a corporate affiliate of Nebraska Methodist Health System. This affiliation has allowed JEH to work with other providers in Iowa and Nebraska to enhance regional access to specialized health care services.

Although the years have brought change, the goal of the Faith Band and WCA remain the same as in 1884: to provide complete, compassionate medical care. With foresight and dedication, Jennie Edmundson Hospital will continue to offer that care for generations to come.